NCIS Boss Tees Up ‘Season of Love’ (!), Plus a Fun, New Crossover Dynamic

Yes, you read that headline right. NCIS in its 20th year is ready to serve up a “Season of Love.” But what does that mean, exactly?

After all, when last we tuned in, the mood was very tense, and not lovey-dovey, as Special Agent Alden Parker (played by Gary Cole) went on the lam with his ex-wife Vivian (guest star Teri Polo), after she had been ki***d and he in turn got framed for the murder of his former partner at the FBI.

Yet as they sped away, viewers saw Vivian secretly text a mysterious someone, “It’s done. I have him.” The she-devil!

When Season 20 opens up Monday, Sept. 19 at 9/8c, only a day or so has passed and Parker is still on the run, while the NCIS team investigates who from might have a personal vendetta against him. Is it the mysterious “Raven” that has taunted the team since the middle of last season?

And if so, is “The Raven” in fact a singular person, or some sort of nefarious group? “That’s an interesting question…,” NCIS showrunner Steven D. Binder tells TVLine. “We don’t exactly know who or what The Raven is. We think we know, but I can tell you that we don’t know.”

To clear Parker’s name, the team will enlist the help of NCIS: Hawai’i’s Special Agent Jane Tennant (played Vanessa Lachey) and Computer Specialist Ernie Malick (Jason Antoon), who are in town for a meeting with Director Vance (Rocky Carroll). That sets the stage for a two-part crossover event that will spill over into NCIS: Hawai’i’s own season opener, airing Monday at 10 pm.
1
Hawai’i Crossover Reveals a Shared ‘Fascination’ 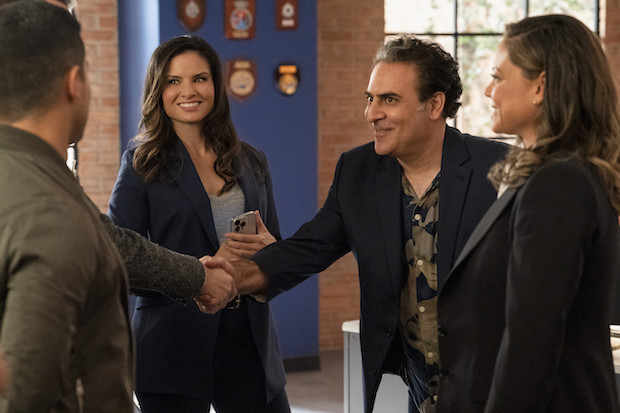 In the season-opening crossover event, one might think that our McGee (played by Seam Murray) and NCIS: Hawai’i‘s own keyboard warrior, Ernie, might regard one another with a certain “Hey, I’ve heard about you!” awe. But that is not the crossover dynamic to be on the watch for.

“I think that just by virtue of Tim having been around the block for 20 years, he’s inherently not going to be as in awe of Ernie as one might expect,” says showrunner Steven D. Binder. “Now, Ernie might feel differently about that, but Ernie is the new kid on the block, so to speak.”

So who will Ernie instead zero in on? “The one to keep your eye on more is Jimmy (Brian Dietzen) and Ernie,” Binder reveals. After all, as established in the Hawaii half of last season’s crossover and toward the close of NCIS Season 19, “they both have a fascination with Agent Knight (Katrina Law).”

2
More Episodes Will Be Character-Centric 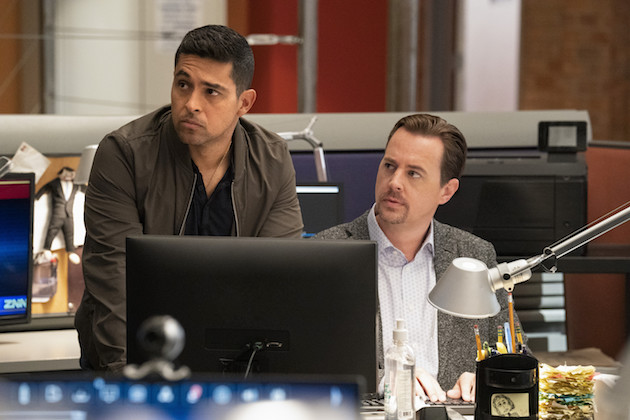 Citing past examples of how -centric episodes can pay off in the long run, Binder says, “You bring in Parker’s wife, and then suddenly that opens up a door for a whole new angle on that character and how he interacts with people. Another good example of that is the Fornell character played by Joe Spano. We’ve gotten miles and miles of stories out of that one episode where he showed up as an antagonist to Gibbs, and now he’s part of the fabric of the show.”

Looking ahead, teasing one of the new season’s early episodes, Binder says, “We see McGee as an agent, but he’s also a dad, so we’re going to have a show that focuses around him being a dad, which should be fun.
3
Jimmy/Jess Will Be Different From #Tiva, #Ellick 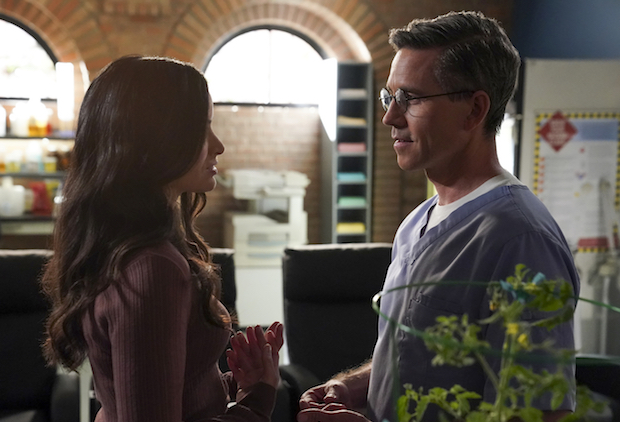 NCIS‘ famous “Will They/Won’t They” between Tony and Ziva (aka “Tiva”) “became a thing that externally was more of a thing than it was in our heads,” Binder recalls. And with Torres and Special Agent Ellie Bishop (former cast member Emily Wickersham), the writers sensed some sparks and “took the football and ran with it,” says the EP.

But the sweet, mutual and forthright attraction between Special Agent Knight and Dr. Jimmy Palmer will be handled very differently than either of the above workplace romances.

“This one is something that we birthed ourselves, in a vacuum,” says Binder. “We didn’t want to go down the same road we went down before. Instead, we wanted it to play out more realistically — two people at work, who actually having feelings towards each other, and they’re not being so coy about it.”

The reason that #Tiva and #Ellick were as protracted as they were is “they were just in denial, and we’d play with it now and again and never did anything with it. Fans are well aware of that!” the EP admits with a laugh. “But here we’re trying to do something that’s realistic to the time and place we live in — and, as a side note, is entertaining as well.”

As glimpsed ahead of Jimmy and Jess’ first kiss in the Season 19 finale, “There are hesitations that they’re going to have, based on their personalities per se,” but “there’s a lot to explore when you get down with a microscope and look at the minutia of how a relationship develops — the tentativeness, the awkwardness, how Jimmy’s been out of the game for a while, how you imagine Knight has been all over the game,” says Binder. “We’re really trying to break it apart and explore the fun of each moment.”

All told, as that headline up above teased you, “I’ve been calling it ‘the season of love,’” Binder shared. “So we may see a bunch of things happening, with a bunch of our characters.”

4
Which Characters Are Returning? Who’s New? 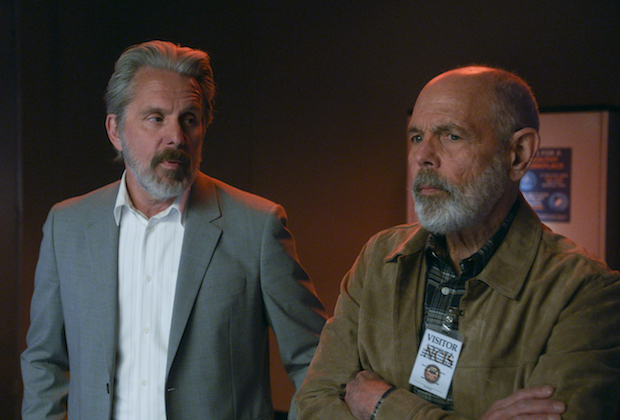 As noted above, Teri Polo will be back for the season opener, as Parker’s ex-wife Vivian, as will series vet Joe Spano, as former G-man Tobias Fornell.

Beyond that, viewers can expect to see “Dr. Grace” again (played by Laura San Giacomo), and “we’re going to meet some family members of some characters,” Binder teased.

5
Where in the World Is Leroy Jethro Gibbs? 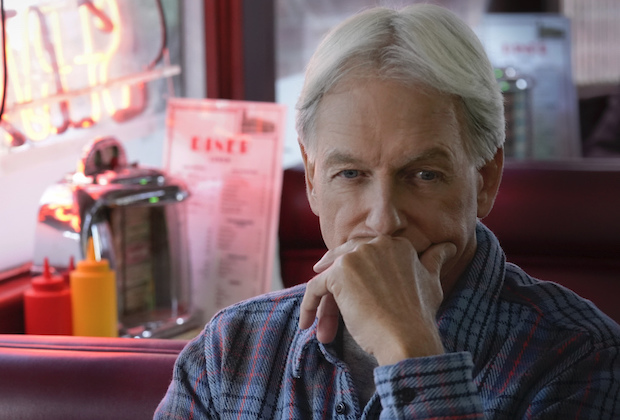 Rather than ask showrunner Steven D. Binder if Mark Harmon — who is still billed as a series regular — is due for any on-camera encores as Gibbs, and only get the usual “the door is always open” response, TVLine instead inquired if Season 20 might offer any verbal updates on what Boss is up to.

“That’s a really interesting veil, where Gibbs is and how we left him,” Binder points out. “There’s this feeling among the writing staff — and I share it — that we left him sort of nowhere but also everywhere. Like, when I think of Gibbs, I don’t think of him living in an apartment in Alaska. Instead, I imagine he’s sort of melted into pixie dust and is floating around in the sky until he is called back to duty.”

As such, Binder contends, to have a line of dialogue that crystalizes what Gibbs is up to and where would “smear dirt all over” the perfect ending that was crafted for the character in early Season 19. “When he has ‘appeared’ so far, it was things like the college trust fund that he deposited money into,” or NCIS: Hawai’i‘s mention of how Gibbs quietly steered Jane Tennant’s career, “things that gave us no shape to who or what kind of life he is living right now,” Binder notes. “We do have plans to involve him in those ways again… ways that don’t rip off the scab and don’t ruin this what I thought was the only fitting ending we could have given this guy.”