It turns out that NCIS: Los Angeles star Eric Christian Olsen is an emotional man. He misses his fellow colleagues anytime they are away for an extended period. 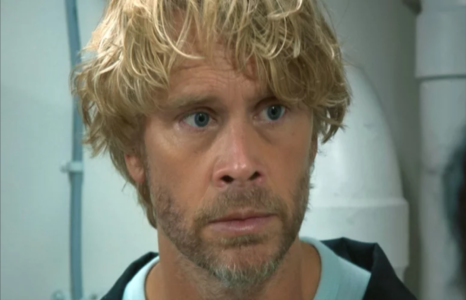 You probably recognize Olsen’s face right off the bat. He is well known for playing Detective Marty Deeks on CBS’s NCIS: Los Angeles. And while Olsen may play a handsome detective on the show, he’s basically a soft teddy bear when he’s off-camera.

He explained what it was like to get Barret Foa back on the set after some time away in a 2019 interview with CarterMatt.com. Foa took a leave of absence that year to star in a production of Angels in America.

“Angels in America is one of my favorite plays,” Olsen said. “For him to do that deep dive on that kind of work and come back… it’s a life experience. You come back and that plays out in everything else we do. Those kinds of opportunities, and that CBS and [R. Scott Gemmill] and [John Peter Kousakis] our writers gave him the opportunity to go do that, are so human. It’s such a wonderful example of humanity.”

Olsen believes it’s those acts of kindness and humanity that make NCIS: Los Angeles so successful.

“This is a big hit TV show that has serious restrictions and they always choose the human element. In this case, that human element was giving Barrett the opportunity to go do Angels in America. Our show is better because of it. When Barrett comes back, he carries with him that confidence. The reason that episode in San Francisco is going to be so good is because he’s bringing that to this role. It was wonderful to have him back. We missed him deeply.”

During that same interview, Eric Christian Olsen also talks about missing a couple of fellow actors when they aren’t around the set of NCIS: Los Angeles. Can you guess who we are talking about here?

One of them is Miguel Ferrer. Ferrer played NCIS Assistant Director Owen Granger on the show from 2012-2017. Unfortunately, he passed away in 2017 after a battle with throat cancer.

The other, of course, is Linda Hunt. She portrays the lovable character of Henrietta “Hetty” Lange on the hit show and she has since 2009.

“We’ve had serious loss. There isn’t a day that goes by that I don’t think about Miguel and what he brought to the show and to the family. Now, Linda [Hunt] is kind of in and out. We missed Barrett and we miss Linda when she’s not around, and I think about Miguel every day.”

Thankfully, though, Hetty is back full-time in the current season