The crossover is expected to air in January
NCIS star Wilmer Valderrama has shared an epic behind-the-scenes snap of the cast filming the upcoming crossover event which will see the original series team up with NCIS: Los Angeles and NCIS: Hawai’i.
Taking to social media, the actor posted a selfie which showed the star posing alongside NCIS: LA stars Chris O’Donnell, Eric Olsen, LL Cool J, Daniela Ruah, Medalion Rahimi, and Gerald McRaney, as well as actresses Vanessa Lachey, Yasmine Al-Bustami from the show’s Hawai’i spin-off.
He wrote in the caption: “Gonna go ahead and leave this ‘first time ever’ over here, Three’s Company? Or 3 #NCIS teams joining for 1 epic case? Coming soon….”

Fans were quick to express their excitement in the comments section, with one person writing: “My favorite teams in one picture! I’m so excited!!” while another added: “Wowwwww that’s gonna be one epic crossover.”

However, some fans couldn’t help but express their concern over whether Linda Hunt’s Hetty Lange will feature in the episode, worrying that the crossover “won’t be the same” without her.

Hetty last appeared in the premiere episode of season 14, when it was suggested that the Operations Manager had staged her own death after a child’s body carrying her ID was discovered in Syria, her last known location. 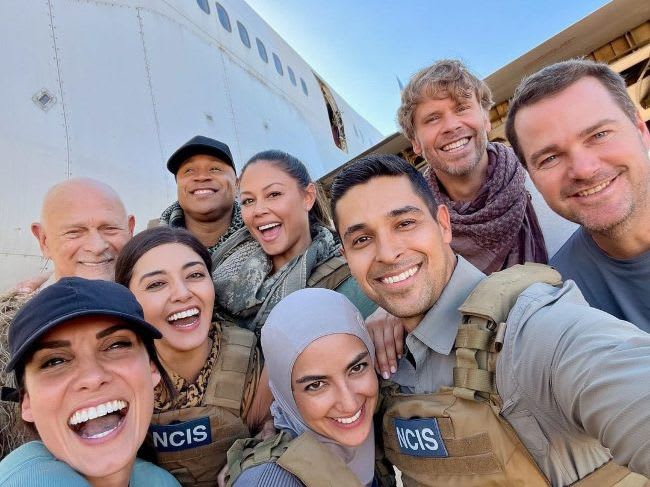 One person wrote: “Without Hetty is not the same!” while another added: “But Gibbs… And Hetty.”

Considering the show’s executive producer R. Scott Gemmill recently confirmed that Hetty would return at some point in season 14, some fans were hopeful that the crossover will see the teams join forces to save her.

ing if it has to do with a Hetty Rescue???” while another suggested that two agents could end up dead during the rescue operation, tweeting: “If it is due to a Hetty rescue and these bombers will kill Adian parker and Jane Tennett as an exchange to let Hetty go.”

While CBS has yet to announce an official release date, fans can expect to see the crossover sometime in January next year.