If you look carefully, you can see the ghost of Abby Scuito hovering over this week’s NCIS episode. Let’s recap!

Kasie’s (Diona Reasonover) at her martial arts class (no surprise after some of her work-based trauma over the seasons), where her instructor points out that she’s still struggling to listen to her gut.

As she walks out that night, she’s too wrapped up in watching the video of her sparring session to see a mysterious van waiting to snatch her from the dark parking lot. Not to victim-blame, but ma’am, you work at NCIS. You’ve seen all kinds of dangerous things. Keep your head on a swivel!

In the big orange room, McGee (Sean Murray) complains about the sluggishness of his devices, and hilariously, his laptop keeps grinding to a halt with a sound like malfunctioning robot gears, which isn’t really a thing that computers do. 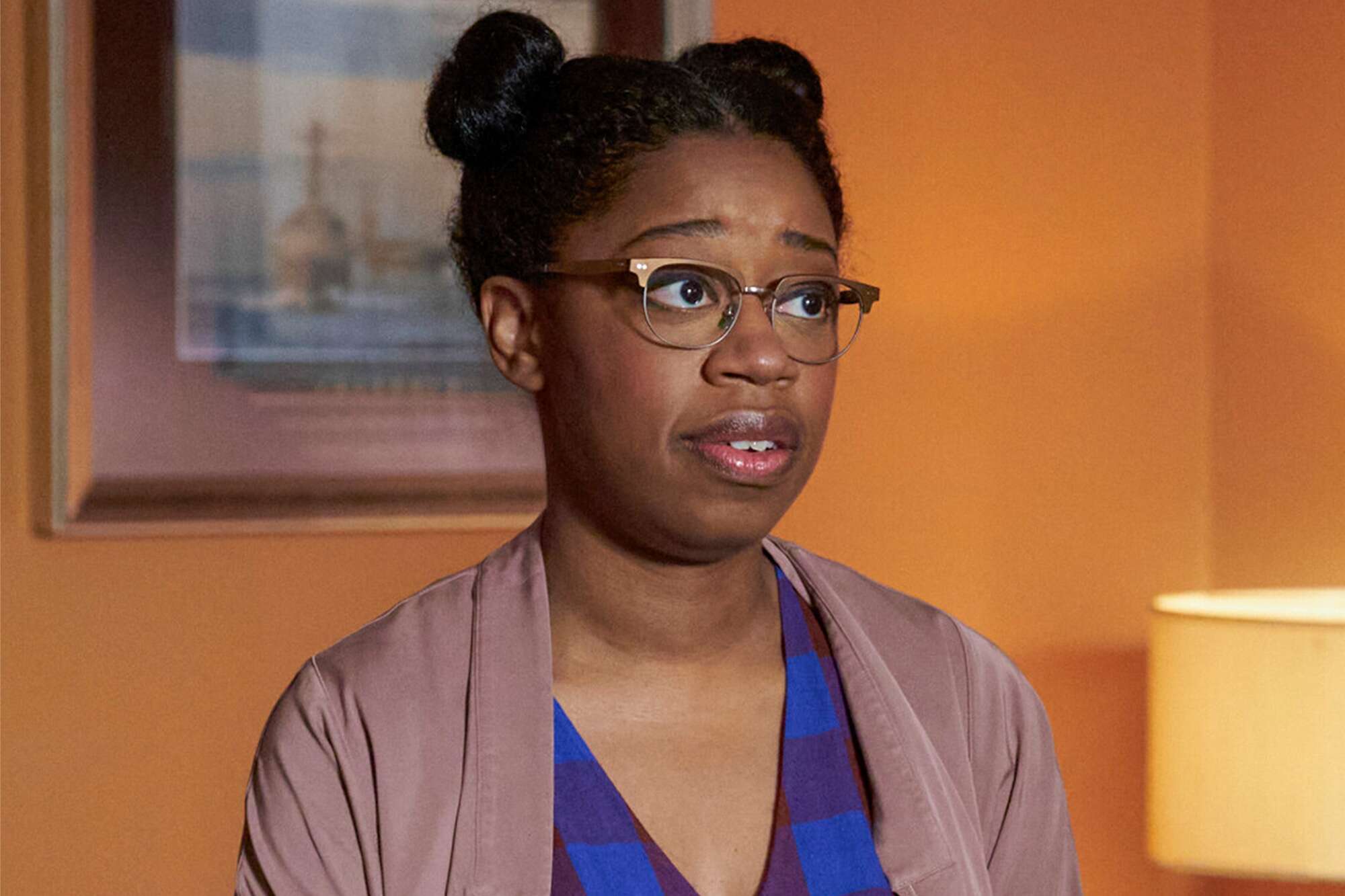 The slow network doesn’t keep the team from getting called to its latest murder, where the team is shocked to find fellow NCIS agent Otis Khatri dead in the house of Lt. Mary Laredo, who’s deployed at the moment.

Otis was the person who oversaw NCIS’ humanitarian response after wars and natural disasters, and he’d volunteered to watch Laredo’s beloved cat, Prince Charming, while she’s gone. When the team interviews Otis’ sister, she recognizes Tim as “McGeek” and says Otis hadn’t wanted to talk about work for the past week or so.

They find evidence of blood at the scene that had been cleaned up after Prince Charming walked through it, which means the missing cat may have bloody DNA on his paws.

So Knight (Katrina Law) searches for Prince Charming by checking local vets to see if his microchip has been scanned, but is she searching the neighborhood? Posting fliers? Setting tuna out at Laredo’s house to lure him out of hiding? It’s like she’s never searched for a lost pet before.

Oh, and Kasie’s also missing, which has Palmer (Brian Dietzen) worried. But Parker (Gary Cole) assures him that she requested a personal day off, and sir, you work at NCIS. You’ve seen all kinds of dangerous things. If your colleague says it’s weird that Kasie’s missing work without arranging for anyone to cover for her, listen to him!

Anyway, Palmer discovered sky-high levels of sesame oil in Otis’ blood, and since he was horribly allergic and vigilant about checking ingredients before eating anything, Palmer assumes Otis must’ve trusted the person who gave him the dosed food.

Palmer does his best to process the evidence in Kasie’s absence, even busting out the hand-written Abby’s Lab for Dummies manual in a sequence accompanied by the techno/punk soundtrack that used to play over Abby’s scenes, which is just delightful.

Alas, Abby’s manual isn’t user-friendly enough, and Palmer executes a command that makes all the computers freak out. Good thing Kasie’s in the building to set things right and reveal that the prints on Otis’ laptop belong to… Kasie. DUN.

She insists on being interrogated in the normal room, but twist, she sits down in the interrogator’s seat, asking McGee to account for the multiple shipments of electronic equipment he recently received from China. McGeek says they were parts to fix up an old Barry Smiles robot, aka the most expressive talking bear of the ’80s.

This satisfies Kasie, who tells the interrogation room camera that her investigation into the mole at NCIS is officially over. Then she explains to her flabbergasted colleagues that she was recruited by Defense Criminal Investigation Services a few months ago to look for the mole among her colleagues. Even Vance (Rocky Carroll) didn’t know.

DCIS Agent Eden Grayson (Amber Friendly) explains that they cleared Kasie first, then put her to work. Vance is incredulous that they didn’t even give Kasie a support team, especially since she’s not an actual agent.

And it was hard on her! She tells Palmer keeping secrets was lonely, and she even used PTO to wrap up her work clearing the team. Wait, she took a PERSONAL DAY for that? They’d better return that to her.

Anyway, back to the case: Kasie discovers that Otis was using the NCIS system to steal proprietary info from massive oil and tech companies and ransoming it back to them, which is what was slowing down the network.

The team finds one of the company owners who refused to pay the ransome and connect with the guy on a yacht in Ibiza. He says he got a new ransom demand that morning and paid it, but he refuses to say where he sent the money.

To find out who Otis was working with, NCIS needs access to that company’s server room, so they send Kasie in through the air vent with the whole team supporting her this time. When Kasie tries to apologize to Knight for the surveillance, Jess shuts her down quick, saying Kasie was just doing her job. Knight is correct, and good for her for making sure Kasie knows it.

As Kasie crawls through the vent, she tells the team over coms that she’s proud of the job she did and actually feels closer to them all now. When she drops into the server room, Torres (Wilmer Valderrama) calls her Rambo, but she’s clearly channeling Ethan Hunt.

Complications arrive when a young company employee enters the server room, and Kasie’s unable to come up with a good cover story for what she’s doing there, flailing so hard that the woman asks, “Are you… good?” which is the perfect Gen Z response.

Despite the team assuring Kasie that they have her back, not one of them helps her come up with a good cover story, but she pulls it together on her own and yells at the woman to get out of the server room with her spillable beverage.

Thanks to her quick thinking, the team learns that a Caymans Island account auto-donates the millions in ransomware to charities. In fact, every blackmailed company had defaulted on a public pledge to donate to various charities, which makes Otis a Robin Hood hacker.

And now we know who his killer is thanks to Knight singing Laredo’s silly cat song to lure Prince Charming back home. She and Palmer ham-handedly deal with the freaked-out cat (of course he’s taking swipes at them — he’s in a cage in a lab surrounded by strangers!) But his paws yield the killers’ DNA, which turns out to be…

… Agent Grayson! At Kasie’s debrief in the mysterious DCIS van, Grayson jokes that you can’t really ask a charity to give the donation back, but Kasie never told Grayson that detail of the case. Last week, I said I love this trope, but come on, show, two weeks in a row?

By the time the team gets there, a full-on struggle’s taking place in the van, and the door flies open to reveal that Kasie managed to subdue the gun-carrying Grayson. Look at our favorite lab tech finally listening to her gut!

This is such a cool callback to Abby’s van fight in “Bloodbath,” which was season 3, episode 21 (and is included in EW’s list of the 25 essential NCIS episodes). Tangle with an NCIS lab tech at your own peril, bad guys!

So yeah, Otis noticed the blackmail scheme and brought it to Grayson, who murdered him, then tried to frame him for the Robin Hood scheme.

The episode closes with Vance telling Otis’ sister about what a stellar agent and human he was and a more confident Kasie back on the sparring mat.