Mark Harmon’s family are gearing up for Thanksgiving and it’s set to be a very special one for them.
The former NCIS star and his wife Pam Dawber recently had reason to celebrate as their son Sean tied the knot to Courtney Prather, surrounded by their loved ones in a lavish ceremony in the Maldives.

This year, the Harmons will be celebrating their first Thanksgiving with Courtney officially part of their family.
They will no doubt be making it extra special too, as they are all incredibly close. In fact, Mark even had a special role to play in the proposal back in 2021.
At the time, Courtney posted photos from the moment she said ‘Yes’ on Instagram, and explained that the horse who was a big part of their engagement photoshoot was actually Mark’s horse, Half n’ Half.

“Also we found out the next morning that the horse ‘officiating’ the proposal was Sean’s dad’s horse for years and years called Half n’ Half and it made it all the more special,” she wrote in the caption at the time.

Mark and Pam are also parents to son Ty, who works as a screenwriter. Sean, meanwhile, is an actor, and ever since 2008, he has appeared in NCIS as a young Leroy Gibbs in flashback episodes.
To date, he has appeared on seven of the show’s episodes, with his most recent cameo being in the 2020 episode Everything Starts Somewhere.

Gushing about his sons in a rare interview with Entertainment Tonight, Mark said of Sean: “I’m proud of him taking his work seriously and how he approaches being an actor — not just on this show.” 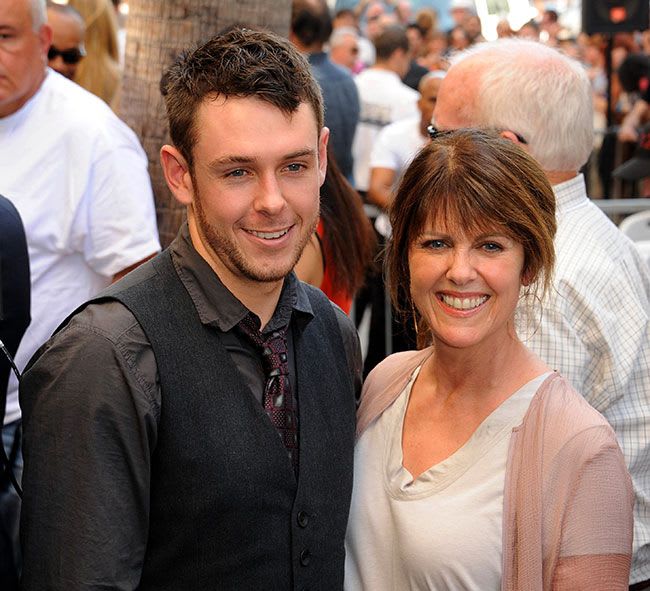 Sean with his famous mom

“I’m proud of both our boys, and they work hard at what they do and I’m proud that they get up in the morning and try to do that every day.”
Mark’s fans were left devastated when he left his role as Leroy Gibbs in NCIS in season 19 of the popular show.

He opened up about his decision to quit the program almost a year after leaving the show, for a special featurette on the show’s season 19 DVD release.

He sat down to discuss the legacy of his character, as well as his thoughts on how the show wrapped up his storyline, and admitted that the opportunity to tackle “fresh” and “challenging” material is what kept him returning to the drama every season, alluding to the possibility that he felt that after almost two decades on the show, he no longer felt that was the case.